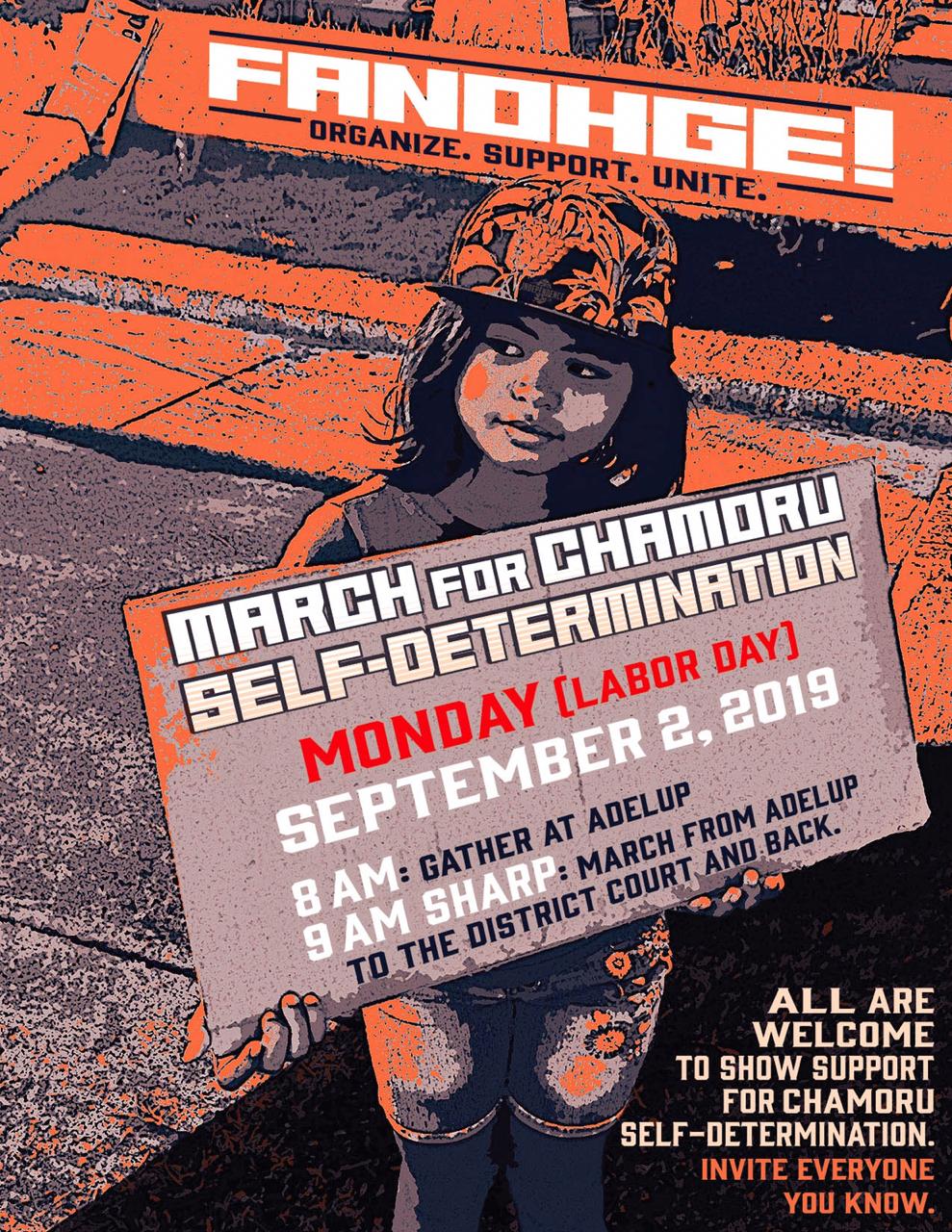 Participate in this historic event! Earn service learning hours by sharing this information and by getting others to participate.  ’Fanohge’ is the CHamoru word for 'stand' and is a call to everyone on Guam to create the largest political gathering in Guam’s history. The purpose is to seek restorative justice by holding the U.S. to its promise to allow CHamorus to vote for their political status.

The Fanohge March for CHamoru Self-Determination encourages respect for the native inhabitants of Guam and brings to the forefront the promise and legal commitment that the U.S. made to the CHamorus. When the United States signed the Treaty of Paris in  1898, it committed itself to guide the people of Guam to self-rule or sovereignty.

Self-determination is the belief that the native people of Guam deserve the opportunity to express their preference for a self-governing political status.  Currently, Guam is a colony and an ‘unincorporated territory’.  This means that even though we are U.S. citizens, we cannot vote for the President of the U.S., we have a representative in Congress, but he can’t vote, and we have little power with respect to how our island is used by the military and federal government. Independence, statehood, or free association are forms of self-rule or sovereignty, and are preferred over the status quo of being a colony and unincorporated territory.

Since Guam’s political status affects everyone, people of all ethnicities and cultures are welcome to the march. Spread the word and march with your family, clan, or club. All efforts have been made to ensure that the event is peaceful and safe.

Activity Instruction:
On Monday, September 2nd, meet at the Governor’s Office in Adelup starting around 8:00 am.  The march starts at 9:00 am sharp. Marchers will head to the Federal District Court building, and then return to Adelup for a rally. The event should be over between 11:30 and 12 noon.

A major goal of the March is to get as many participants as possible.

- Talk to friends, other students, or family members about the importance of self-determination and try to convince at least 10 people to show up and march, the more, the better!  Post a picture of your group at the March/rally on the Fanohge March Facebook page.

Reflection Instruction:
The story of the CHamoru people includes over 400 years of being ruled by powerful nations, Spain, the United States, and Japan (from 1941-44 during World War II). After the Spanish-American War in 1898, the U.S. signed the Treaty of Paris and promised to lead the CHamoru people, the native inhabitants of Guam, toward some form of self-governance. Recently, U.S. federal courts ruled that it would be racist if non-CHamorus were not allowed to vote. Guam has many people of different cultures living side by side with the CHamorus. Many have been here for years and were even born here. Do you think that the U.S. should honor that promise and only allow the CHamoru people to vote for the political status of their choice, or, do you think that people who are not CHamoru should also be allowed to vote?  Try to explain your answer.

What did you learn from the speakers at that rally? Did they explain why self-determination by the native people of Guam is important?  Do you think that Guam should move away from its current political status? Why or why not?

During the march, what was your impression of the march and other marchers? Was it a respectful and peaceful event?  Would you participate in a future march or event for this cause?

How was this activity an example of service to the community?

AG1.4 Describe an example of a government policy that has affected a particular racial, ethnic, or religious group.

GH2.3 Identify and describe historical periods and patterns of change during the eras of Guam history, including the following:

WH2.25 Analyze the worldwide impact of World War I, including the following:

U.S. 2.11 Evaluate the emerging role of the U.S. in world affairs, including the following: